The gender pay gap at Bluestone National Park Resort is higher than the national average, however it will need to be read with caution as the overall result is only based on 25% of the Bluestone workforce. Approximately 75% of employees were either on furlough, flexible furlough or statutory leave at the cut off date.

As an employer with more than 250 staff, we are required by law to carry out Gender Pay Reporting under the Equality Act 2010 (Gender Pay Gap Information) Regulations 2017. This involves carrying out six calculations that show the difference between the average earnings of men and women in Bluestone. It does not involve publishing any individual employee’s data. We are required to publish the results on our own website and a government website.

The purpose of this legislation throughout the UK is to identify and eliminate any gender pay gaps where these exist. The 6 key figures are: -

Having now completed the analysis for 2021, we can report that the gender pay gap at Bluestone is higher than the national average of 15.4%.

In a normal trading period, Bluestone employs in excess of 700 employees. The 2021 report includes data on the workforce that were employed in work on 5th April 2021 when the UK and Welsh government were beginning to ease some of the National Lockdown restrictions. As with all other hospitality businesses UK wide, Bluestone was forced to close between late December 2020 and the end of March 2021. As a result, the workforce consisted of 177 employees on the cut off date of 5th April 2021 that were not on furlough or on flexible furlough. The Gender Pay guidance continues to provide direction to exclude employees who were ‘furloughed’ under the HMRC Coronavirus Job Retention Scheme on the 5th April 2021. We removed 530 employees from the calculation, due to furlough and statutory leave.

The following lists the reportable statistics. No detailed commentary has been provided as the reduced sample is not a reflection of the normal staffing demographics at Bluestone. At the cut-off date, a lower percentage of ‘operational’ staff were classed as full-pay relevant employees due to 75% of the workforce being on furlough, flexible furlough or statutory leave. 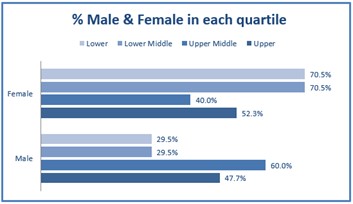 Whilst the above statistics on Gender Pay Gap are not a true reflection of the ‘normal’ staffing demographics at Bluestone, the company is committed to reviewing its gender balance and pay structures to ensure that no significant imbalance develops between male and female employees.

In addition, all employees at Bluestone receive the same benefits regardless of their contracted hours. These include exclusive accommodation deals, access to the resort facilities with their families, a pension scheme, and life assurance. All Employees have access to our Wellbeing programme, which includes fitness classes, nutritional advice, and counselling services.