Every child has that one special toy that’s practically part of the family; it goes everywhere they go, has the power to prevent tears and tantrums, and is the ultimate sleepover companion.

As a family-friendly holiday resort, Bluestone knows how important these fluffy friends can be to their littlest guests so when Bluestone heard that a seven-year-old had lost their favourite teddy, the team did everything they could to help.

Bluestone’s team were responding to messages when they came across one that had been sent by Rio, mother to seven-year-old Macs.  Rio explained that they had stayed at Bluestone earlier in the year and during their break Macs had bought a special teddy from the Adventure Centre, which he named “Flopsy”. The family had since been on a cruise and unfortunately while they were there, Mac’s beloved Flopsy was lost.

Rio contacted Bluestone with the hope there was any way to purchase a replacement over the phone but their response surpassed even her expectations. Using photographs sent by Rio, Bluestone’s team not only found an exact replica of Flopsy but they also wrote a letter to Macs, explaining where he had been - even included some photos to prove it!

Please find enclosed someone who’s been dying to see you! Flopsy came to us after accidentally falling into the wrong suitcase during your cruise. Luckily Flopsy went home with someone who lives in Pembrokeshire and found his way back to Bluestone (Flopsy is a very clever bunny as you know).

We were all very happy to see Flopsy but after the long journey to Bluestone, he looked a little bit scruffy so we sent him to the Well Spa where our spa therapists gave him some special treatments to make him look as good as new again!

While he was at Bluestone Flopsy decided to explore; he splashed at the Blue Lagoon, played at the Adventure Centre and even drove a buggy - he asked us to include a few photos so you could see what he’s been up to.

Flopsy missed you very much and after a few days felt much better so he asked us to post him home to you. We’re so pleased that you and Flopsy are such good friends and are there to look after one another. We hope to see you both at Bluestone very soon!

To everyone’s delight, Macs and Flopsy were finally reunited and Rio was made up with the surprise letter. She revealed Macs was over the moon that his favourite toy had returned and loved the tale of how he made it home:

Writing online, she said: “So Bluestone you have exceeded our expectations and we can't thank you enough! My son lost a bunny on a recent holiday that he bought in Bluestone earlier this year! After speaking to Kristina it was arranged for a new "Flopsy" to be purchased and sent to my little boy! 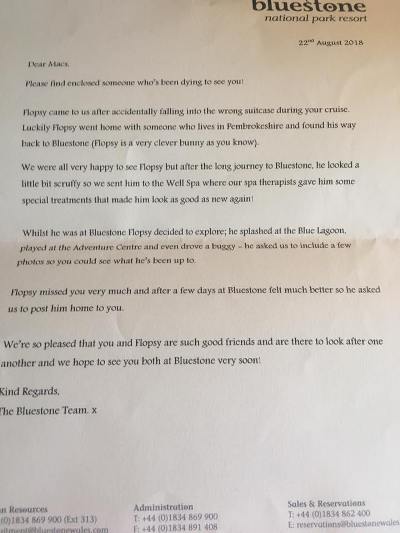 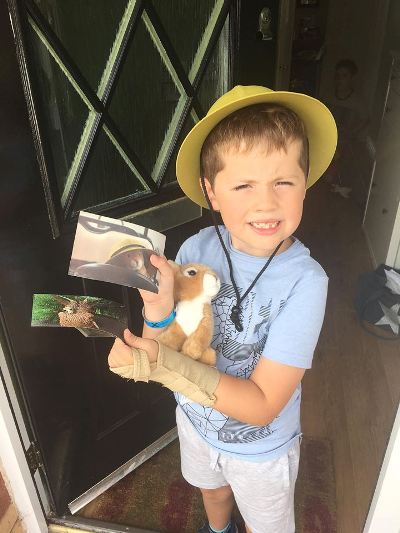 “Flopsy has just arrived along with a fantastic letter and some photographs. My little boy is over the moon and could not believe it when he opened the box. You have gone above and beyond to help and provided a fantastic letter to help explain where the rabbit had been. (All made up by yourselves.)

“This is why we chose Bluestone for our February holiday and have done for the last 8years. Customer service at its best. Thank you so much you have made a 7 year old boy very happy and now there will be no more tears at bedtime. Xx”

Our special thanks to Rio for allowing us to share her story, and of course to Macs and Flopsy for their adorable photos!